The yo-yo action continues in energy markets this week after March trading ended with heavy selling, only to see those losses erased in the first few hours of April.

The OPEC policy meeting is today, which will often add to volatility as rumors and speculation run rampant ahead of the official announcement, if they decide to make one. We’re also heading into a rare holiday weekend that will include the March jobs report when markets are closed, which could create some more swings when trading resumes Sunday night.

Yesterday’s DOE report offered good news for both demand and supply in the U.S., as gasoline consumption hit a six month high, and supplies look like they’re almost back to normal levels.

Total U.S. refinery runs have finally returned to the levels we saw six weeks ago before Texas froze over. PADD 3 (Gulf Coast) run rates are still slightly below where they were prior to the storm as several units are still being repaired, but total runs in the region did increase by more than 550mb/day last week.

Those increased run rates can be felt from West Texas to Philadelphia as allocations begin to ease and outages become more rare this week. Colonial pipeline reported earlier in the week that supplies along its system were increasing, alleviating some of the pressure on markets across the South East, but would still need more product input along the Gulf Coast to get back to normal run rates.

Speaking of pressure on Colonial, the PHMSA released a proposed safety order warning Colonial that it must take measures to reduce potential risk along its system after a study of last year’s gasoline leak that ended up being a much bigger deal than originally thought. This report may be much ado about nothing as Colonial has already implemented safety measures, and was using the recent slowdown in operating rates to perform more maintenance, but it will be important to keep an eye on given its outsized influence on supply across a huge part of the country, not to mention the growing list of disruptions over the past five years.

Another sign that things are getting back to normal on the supply side of the economic equation, imports of petroleum products dropped back closer to their seasonal average after hitting their highest levels in a decade following the polar plunge.

RIN prices also continued their rollercoaster ride Wednesday, taking back 6-8 cents of the losses they faced earlier in the week, as lower than forecast planting estimates in the quarterly crop report had grains and soybean oil trading limit up on the day. No word yet if Mr. Beeks had been consulted on the crop report since those products were selling off sharply ahead of the report which certainly has several traders wishing for a do over.

Click here to download a PDF of today's TACenergy Market Talk, including all charts from the DOE weekly report. 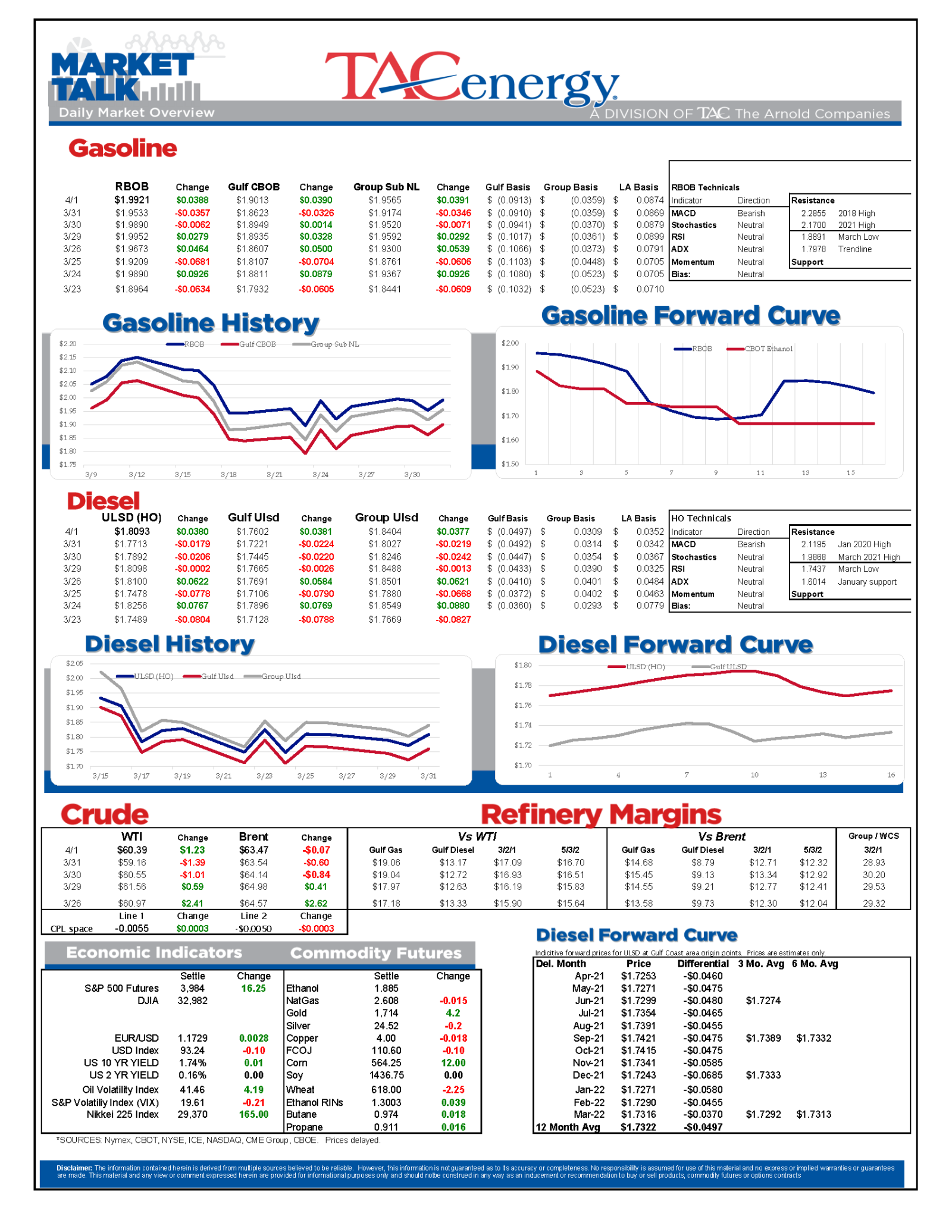