Remember a week ago when everyone was excited for a fresh start in 2021? It’s been a wild first week of the year with markets whiplashing in reaction to large amount of major news stories that ranged from surprising to surreal. In the end, both equity and energy markets look like they’ll end the week with strong gains, and keep the charts pointing higher in the near term as new multi-month highs are being set this morning.

Saudi’s go-it-alone battle to prop up global oil prices is ultimately the big story that seems to have helped energy prices maintain their upward momentum after a huge reversal lower Monday had them on the brink of collapse. While the short term surprise is seen as a gift by many, the other producers need to remember there’s no such thing as a free lunch.

The Senate was flipped, giving Democrats control of the executive and legislative branches for at least two years. That same day, we saw democracy face a most unusual attack, and ultimately prevail. This morning, markets seem to be celebrating a return to (relative) normalcy after the current U.S. President finally conceded defeat and cleared the pathway for the transition of power in less than two weeks.

For perspective on how busy it’s been: In most weeks, Iranian sabre rattling such as threatening the U.S. Capitol, seizing a Korean oil tanker, and (probably) planting a mine on an Iraqi tanker would have been front page news, and this week it was hardly even mentioned.

The December payroll report released this morning showed a decline of 140,000 jobs in the U.S., as COVID shutdown measures snapped a growth streak for employment dating back to last April. Both the headline and U6 unemployment rates held steady for the month at 6.7% and 11.9% respectively. The bright side of the report was that the estimates for October and November were both increased, by a total of 135,000, nearly offsetting the monthly total. Refined product futures pulled back by almost a penny from their morning highs after the report, as it is another fundamental data-point that there are some major headwinds pushing against fuel consumption this winter.

Today’s interesting read from the WSJ: Why consumer behavior suggests that oil consumption will continue to grow far longer than recent headlines might have you believe. (In other words, everyone likes talking about green energy, but nobody likes paying for it). 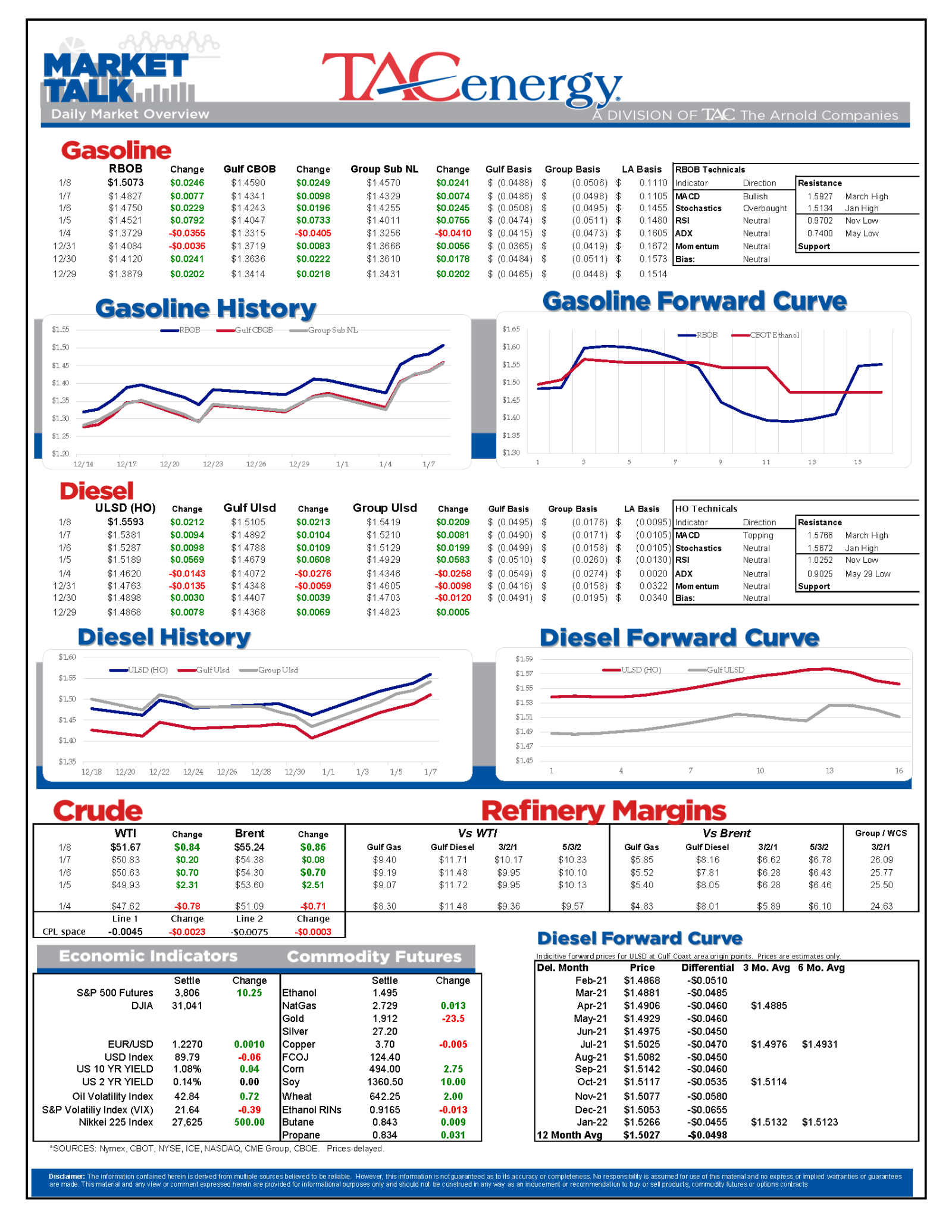