Energy prices are under pressure for a second straight session following strong weekly gains as a trio of supply concerns are dissipating, which seems to be outweighing the stimulus optimism fueling another rally in equity markets.

Hurricane Delta made landfall as a Category 2 storm Friday evening, just 13 miles from where Hurricane Laura hit six weeks ago. While Delta didn’t pack the punch that Laura did, and didn’t stick around long enough to dump the huge amounts of rain parts of the gulf coast saw from Hurricane Sally, it did produce wide spread power outages that are hampering the supply network. Most of the refiners in the Pt Arthur area had to shut units down due to storm-related issues, and Colonial pipeline’s main diesel line is still shut down as they await power to be restored near the Lake Charles area.

No word yet on the status of the Lake Charles refineries, but based on the storm’s path, and the damage we’ve already seen further away in Pt. Arthur, it appears likely both facilities will have to go through another round of repairs to resume operations. Just like with Laura, it will likely be a few days until the damage can be assessed at the facilities that were just resuming operations after Laura and will now start over again.  It appears that the plants around Baton Rouge and New Orleans, which were originally in Delta’s crosshairs, have dodged yet another bullet in the busiest hurricane season on record.

There are roughly seven weeks left in the 2020 Atlantic hurricane season, and the NHC is giving 30% probability that a system churning east of the Windward islands will develop in the next five days. Those are relatively low odds, and wind conditions don’t appear favorable at the moment, but in this record setting year, it seems like a mistake to ignore any potential storm.

Good news for Libya, bad news for OPEC? The beleaguered country’s oil output is coming back online, complicating OPEC’s output plans as Libya has been exempted from previous production cuts.

The Norwegian oil strike came to an end after successful mediation last week, which will keep more than 300mb/day of oil production online, adding to the downward pressure on prices.

Baker Hughes reported four more oil rigs were put to work last week, the third weekly increase in a row. Texas and New Mexico accounted for the build with Permian and Eagle Ford basins each adding one rig on the week, and two more were added in smaller unclassified areas.

Money managers continue to be unimpressed with oil contracts, making small reductions in net length in WTI and Brent for a second week, while making small increases to bullish wagers on refined products. RBOB gasoline continues to see a counter-seasonal bet on higher prices from the large speculators, while ULSD contracts remain in a net short position as the big funds bet diesel prices will lag.

New cleaner energy options continue to be a major story that’s getting even more attention given the polarity of the Presidential candidates on the issue. An unintended consequence in the surge of “green” stimulus packages is that they’re driving up costs for these projects, similar to what we saw with the spike in home remodeling & pool installation projects this summer. A Rystad energy report last week highlighted how those rising costs may hamper the development of one of the more promising alternatives, Green Hydrogen. 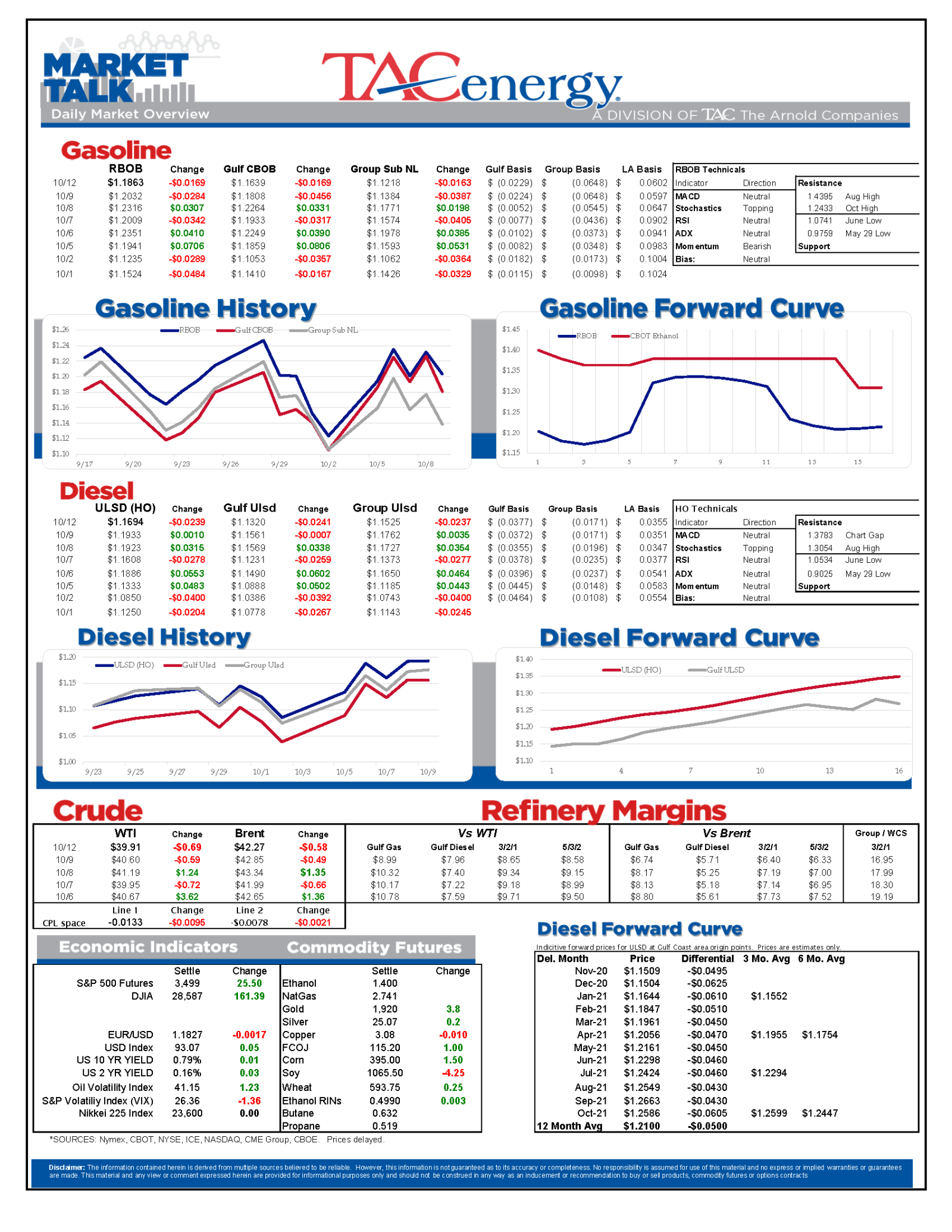 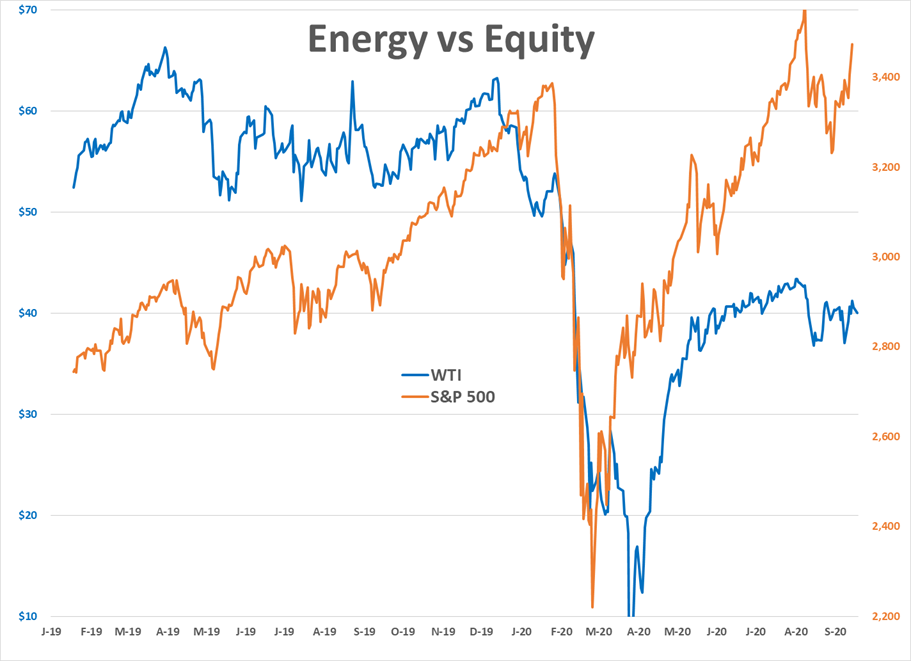 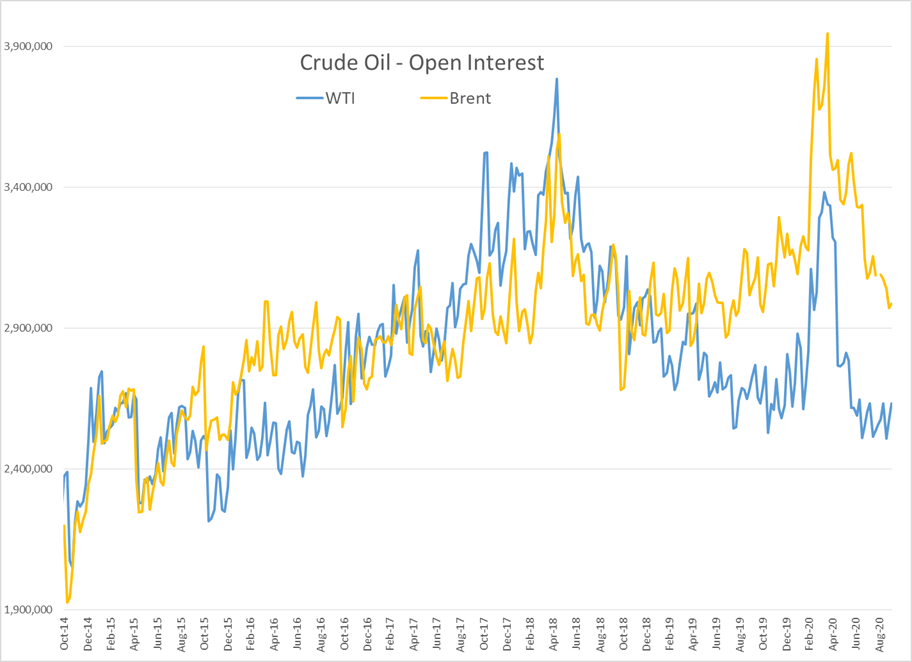