RBOB gasoline futures rallied almost 30 cents in 3 days to start the week, first finding a bid when chart support at the $2 mark held, building momentum as equities rallied, then taking flight Wednesday as the potential for a major hurricane to strike the heart of refining country became a reality. We’re seeing a modest pullback this morning as a shift east in the Storm’s path reduces the threat of widespread supply disruption, but the market will no doubt stay on edge for the rest of the week given the severe nature of this threat.

The national hurricane center is giving 90% odds that the storm in the Caribbean (likely to be named Ida) will form in the next 2 days. Conditions are ripe for rapid development over the warm waters of the Caribbean and then the Gulf of Mexico, with some models suggesting this will become a category 3 hurricane as it heads towards the US Gulf Coast early next week.

The latest models have shifted the projected path east to Louisiana, but the error cone is still high with the entire Texas coast still possibly in range depending on how steering currents shape up this weekend. To try and put it another way, it looks like the US refining zone is about to take a big punch, the only question is if it will be to the head, the midsection, or will it deflect harmlessly off a shoulder?

Worst case scenario is a strike in the Houston area that can disrupt not only numerous refineries, but also multiple pipeline origin points, the country’s busiest shipping lanes, not to mention corporate headquarters. The 2nd worst spot is a strike on the Beaumont/Pt Arthur area due to its concentration of large refineries and pipeline origins, and then the potential impact to supplies in the rest of the country diminish as the forecast moves east. This morning’s pullback in futures seems to be reflective of the storm’s projected shift east, although the overall supply/demand balance is tighter than it’s been in years, so we won’t have a buffer to offset lost production like we did during last year’s hurricane parade, so don’t be surprised to see prices move with each new data release from the NHC this week.

One other potential fallout from the storm: RIN Prices saw a big jump Wednesday, and so far there’s not a story out of Washington DC to blame it on. Since Gulf Coast refiners export roughly 20% of their production, and those export flows are likely to be disrupted from this storm, it’s possible those refiners were forced to cover RINs for product that would otherwise go overseas and not incur an RFS obligation. There’s also the potential that the East Coast will need more gasoline imports if Gulf Coast production is curtailed, another bullish factor for RINs, and then again it’s just as likely someone is betting last week’s rumors on lower RFS targets that sent prices tumbling may not pan out.

WTI and ULSD futures lagged the spike in RBOB, which is common any time there’s a disruption since the lines of cars around the street are filling up gasoline, not diesel or crude oil.  ULSD did manage to erase the full amount of its 7 day selloff, which leaves the door open for a push towards the year’s highs around $2.20. One other factor spurring extra volatility in the RBOB contracts is that the prompt September contract (which expires Tuesday) is the last summer-grade spec of the year.  Most Gulf Coast, West Coast and Chicago-area physical trades are already transitioned to the October futures reference, so a lack of liquidity in September could make that U/V spread even more dangerous than normal.

Charts from the DOE weekly report are included in the link below. Note how much lower inventory levels are compared to this time last year, and you’ll better understand why this storm has the market on edge whereas we largely shrugged off 6 landfalls in 2020.

Click here to download a PDF of today's TACenergy Market Talk, including all charts from the DOE weekly report. 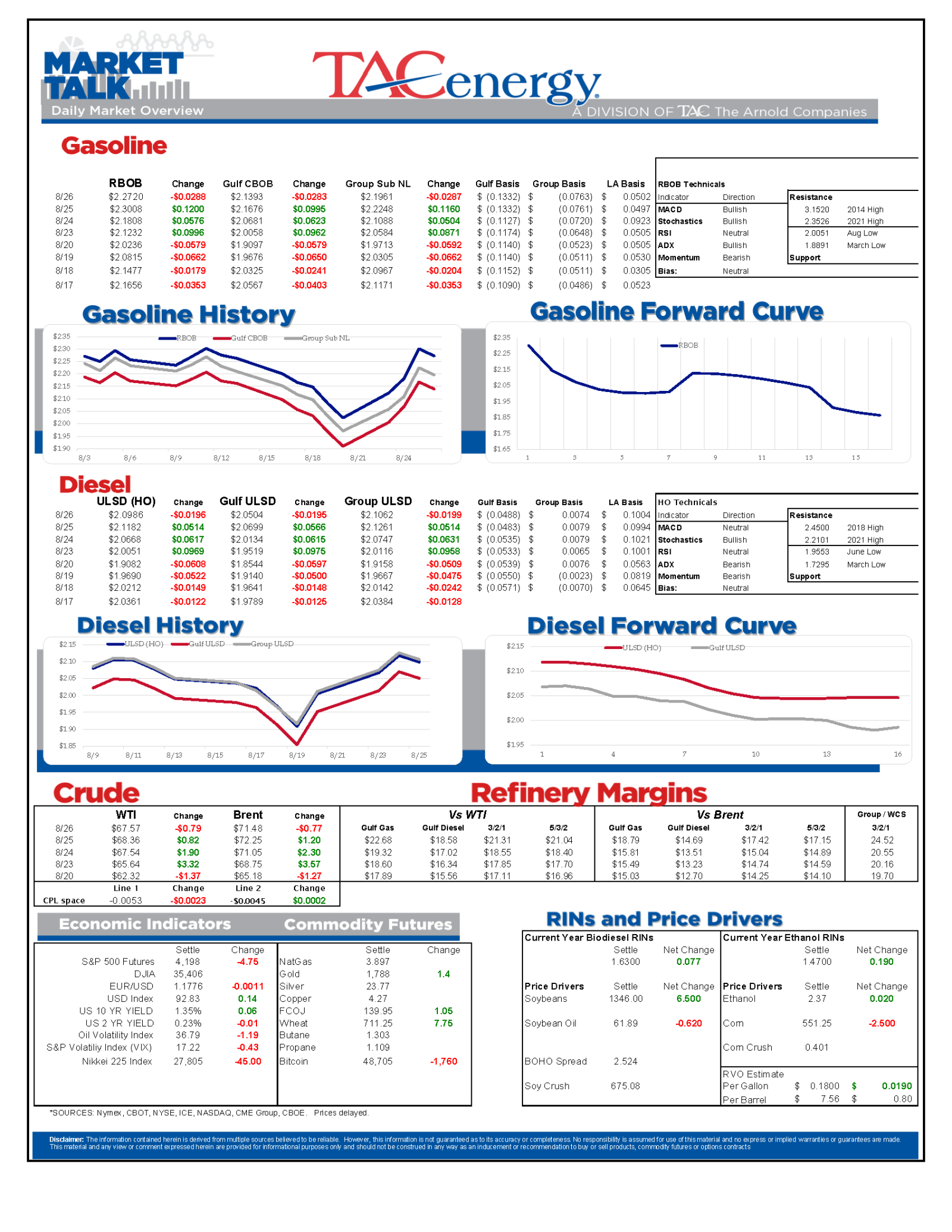