Refined Products Struggle To Keep Up After Friday’s Report

Oil prices are reaching fresh multi-year highs this morning, while refined products struggle to keep up after Friday’s report on potential changes to the RFS became a game changer for RIN prices, which is having a major impact on crack spreads. Equity markets continue to hold near record highs, and that may be enough to keep the oil price rally intact, while products seem like they be stuck watching the latest news out of Washington.

There were no further developments following the Reuters report Friday that the President was mulling RFS relief for refiners, but RIN values still dropped as much as 30 cents on the day, and ended the day trading down around 27 cents from Thursday’s record close. With numerous other potential deals being negotiated on infrastructure spending and energy policy, it’s easy to see the RFS changes being used as a bargaining chip, but hard to say how the end result will look.

Baker Hughes reported 6 more oil rigs were put to work last week, resuming the upward trend that stalled the week prior. 4 of the 6 rigs added were in the Permian basin, and the other 2 were in unclassified basins.

Money managers acted like they knew the RFS story was going to be released last week, continuing to add to positions in WTI and Brent, while reducing their length in RBOB and ULSD contracts.  There is now more money held by the large speculative traders classified as money managers betting on higher oil prices than there’s been since July 2018…which is about the last time that we saw oil prices trading at these price levels.

The OPEC monthly Oil market report held global demand estimates steady for the balance of the year, and increased supply estimates slightly as US production has come back online faster than previously anticipated. The Cartel’s production was up 390mb/day for the month, mainly driven by Saudi Arabia, which is unwinding the voluntary production cuts it made to prop up the market last year.

The IEA’s monthly oil market report took a similar stance as the OPEC report, showing more signs of recovery, and forecasting that global demand will return to pre-pandemic levels next year. The report also notes that OPEC should have plenty of spare capacity to meet that demand, and that new refinery projects in Asia and Middle Eastern markets will offset the rash of closures/conversions that have happened in Europe and the Americas over the past year, and will continue to limit refining margins.

The FED’s open market committee (FOMC) meets this week, with an announcement due Wednesday afternoon. The CME’s fedwatch tool shows that traders are only giving 5% odds of a rate increase by the end of the year, so it’s unlikely we’ll see a rate change this week, but as always the market will be watching for any signals that the FOMC plans on reducing the huge amount of liquidity it’s been injecting via asset purchases to prop up the economy since the start of COVID.

Today’s interesting read: a good reminder from John Kemp on why the DOE’s weekly “demand” estimates are notoriously volatile from week to week. 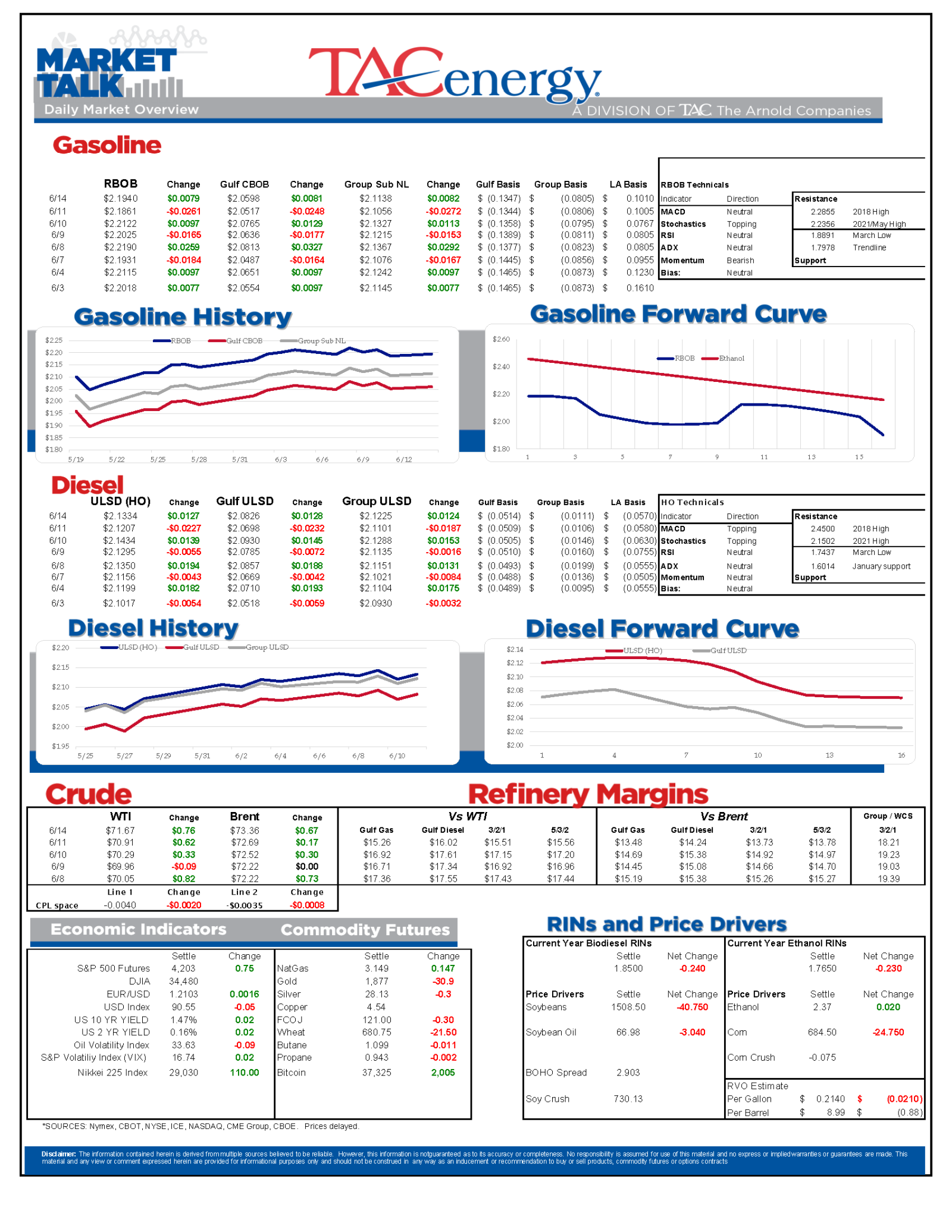 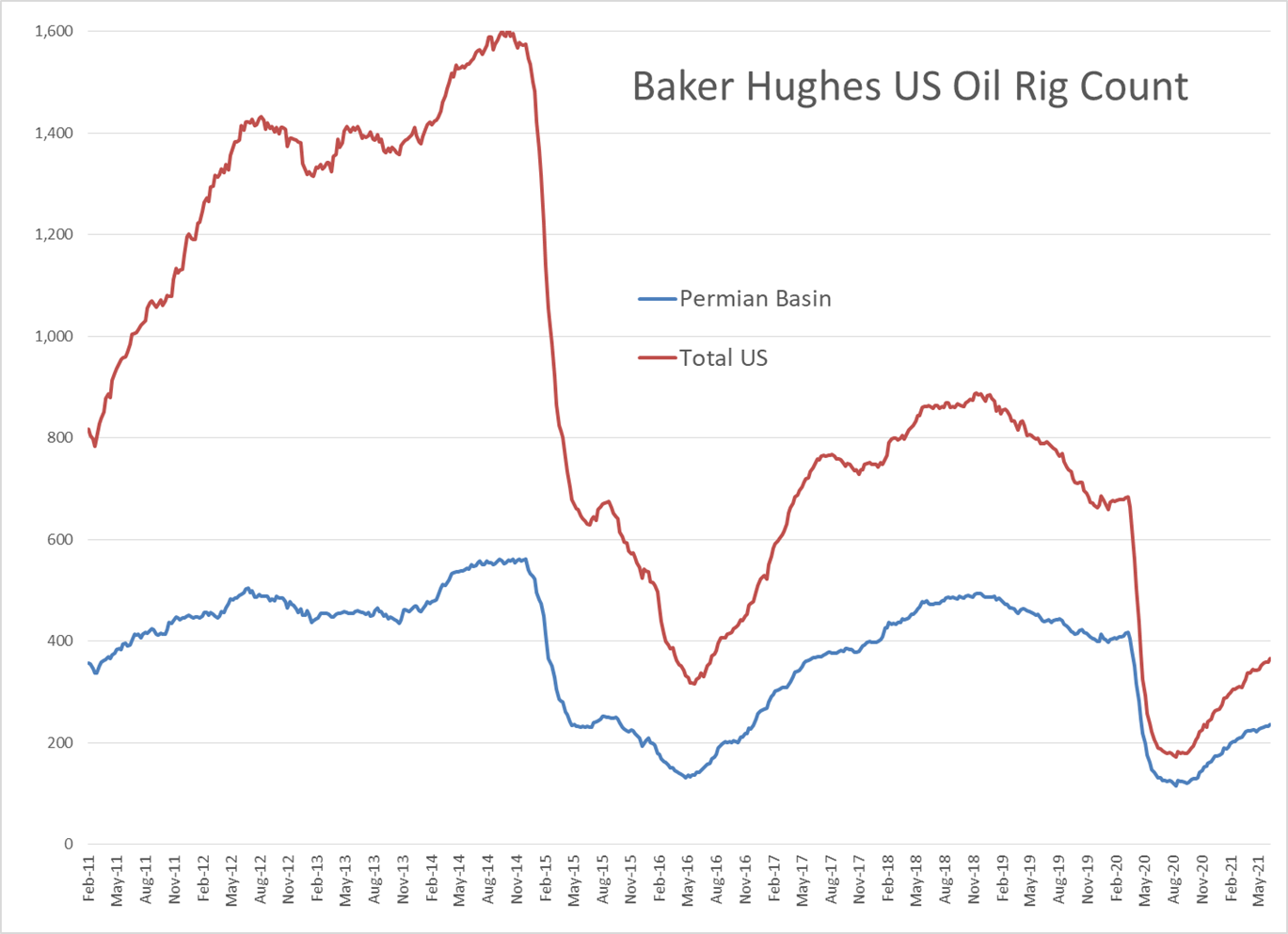 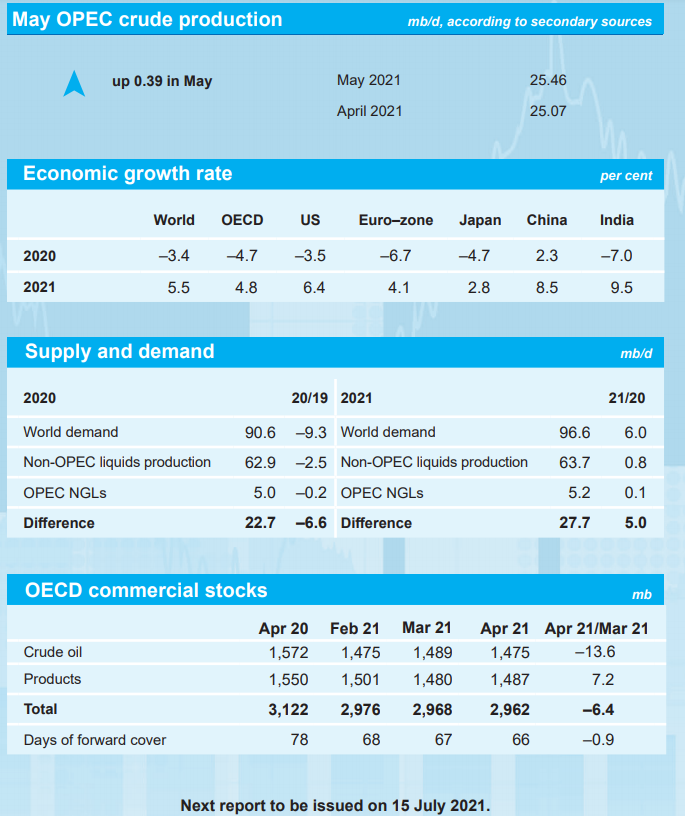