After a huge Thursday rally, and a strong overnight session, refined products are seeing a wave of selling this morning as another volatile week winds down. The trading ranges already today are around 12 cents for both gasoline and diesel contracts, which would have been eye catching a few weeks ago, and now seems pedestrian in comparison to the March Madness we’ve experienced so far.

Speaking of which, ULSD futures rallied 38 cents yesterday, which would have set a daily record before March, and now it barely warrants a mention after 2 weeks where 30 cents moves became the norm.

The back and forth action this week seems to boil down to two issues: There is still no good answer to dealing with a shortage of Russian commodity supplies in the near term, while global demand may be setting up for a steep fall.

The IEA released a 10 point plan to reduce oil demand and avoid a global energy crisis that looks like it was a fun project for a class in middle school. In short, they’re encouraging everyone to go nowhere slowly.

Unfortunately, it looks like Europe and China have their own plans for reducing energy consumption known as the BA.2 COVID wave is forcing new restrictions, and there are early indicators that the latest wave is already spreading in the US.

Net 56? Despite so many Net-Zero by 2050 pledges, the EIA is projecting that renewables will make up just 44% of US Electricity supply in 2050. The report estimates fossil fuels will drop from around 60% today to 44% in 28 years. 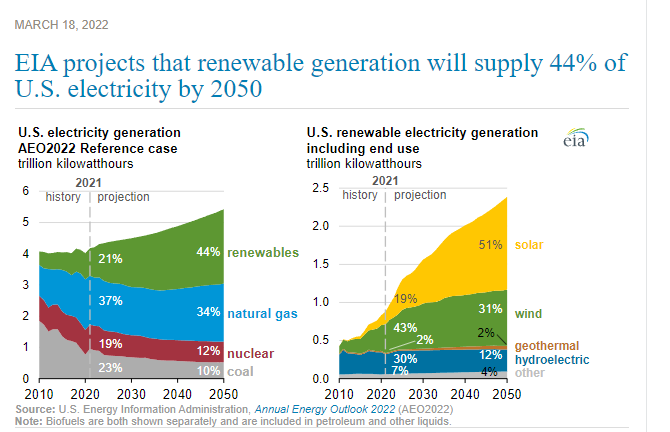