Petroleum futures are moving modestly higher for a second day as the U.S. prepares to transfer power, with a promise of big changes coming soon, but little detail as to what exactly that means. The big 4 energy futures contracts are holding their bullish trend lines, but still have some work to do to break above the high water mark set last week.

Janet Yellen’s testimony during her confirmation hearing Tuesday seemed to provide a spark to energy and equity markets as she made it very clear that the plan was to “act big” with stimulus packages. The expected spending spree also put the U.S. dollar back under pressure after a two week bounce. While the dollar/oil correlation has weakened in recent weeks, as long as markets are focused on money printing (aka stimulus), expect to hear more about that relationship as a daily factor in price movements.

While most of the U.S. focus is on domestic changes, there’s plenty of activity to keep an eye on in the Middle East. Iran is trying to make noise again, apparently trying to pressure the new administration by increasing military exercises while hurling the equivalent of a schoolyard insult by issuing sanctions against the outgoing administration. Meanwhile an explosion and fire hit seven oil tankers in Syria, and it’s unknown at this time what caused that blast. It’s amazing to think that just over a year ago, U.S./Iranian tensions had analysts calling for $100 oil.

The API Inventory report is due out this afternoon, but the EIA report has a rare two-day delay due to the MLK day holiday and the inauguration, and won’t be released until Friday.

The EPA issued a statement Tuesday night that read:

At 7 PM today (EST), January 19, 2021 EPA will provide decisions to some small refineries that have petitioned the agency for RFS small refinery exemptions. At the same time, EPA will update the Renewable Fuel Standard Small Refinery Exemption website (https://www.epa.gov/fuels-registration-reporting-and-compliance-help/rfs-small-refinery-exemptions) to reflect that information.

As of 7:30 a.m. Central on January 20, that website still showed 45 pending petitions for the 2019 and 2020 compliance years, and it appears that the outgoing EPA only approved two petitions for 2019 and one for 2018, apparently leaving the rest to be reviewed by the new administration. RINs look to be bid slightly stronger to start the day following that (lack of) news. 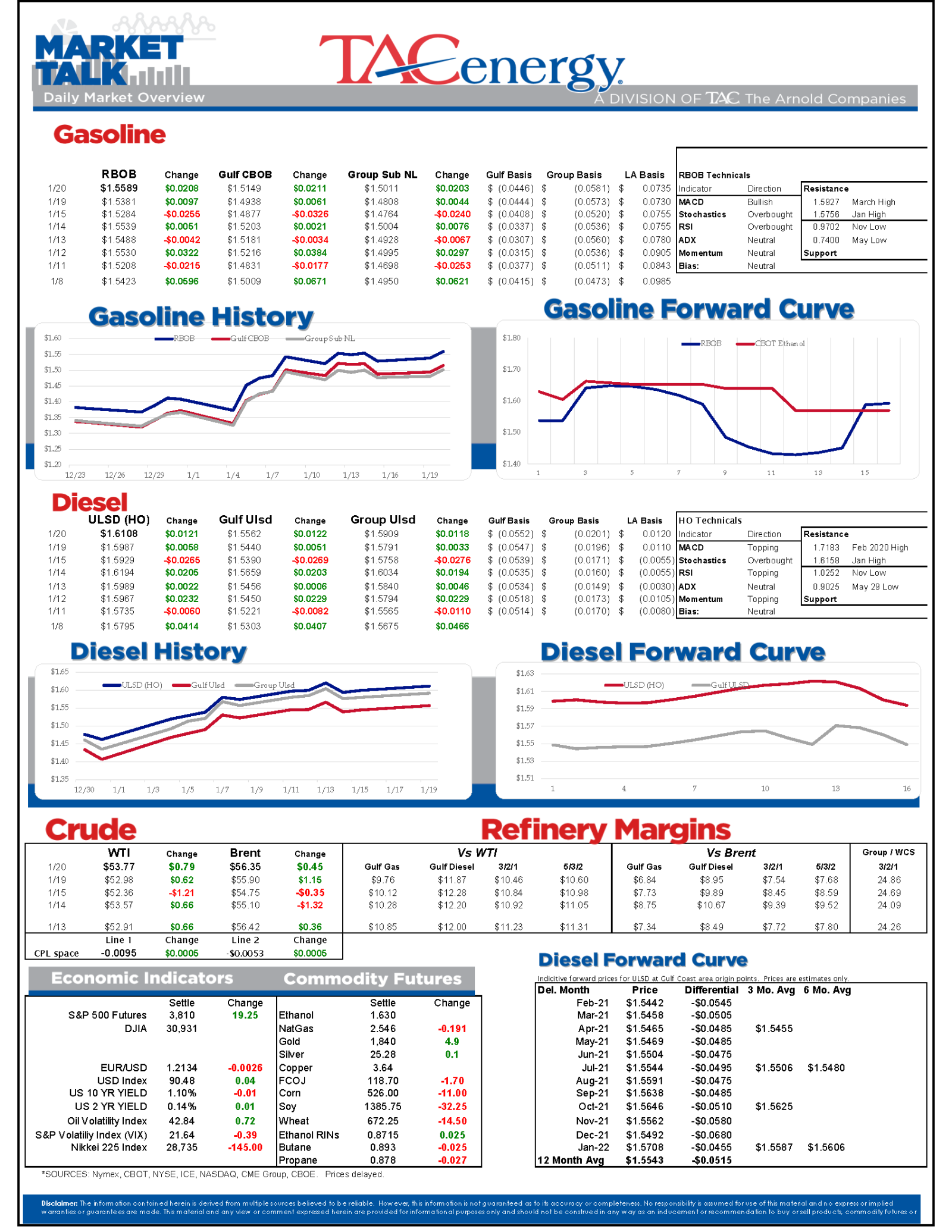