The rollercoaster action in energy futures continues this week as some political posturing proved to have a short-lived impact on prices, and the weekly fundamental data offered a mixed bag to traders.

RBOB gasoline continues to be the most volatile contract, bouncing 9 cents off of its lows Wednesday, only to drop nearly 3 cents again overnight. That bounce was significant for short term charts as it broke the lower highs pattern we’d seen so far in August, and creates a more neutral outlook near term, although longer term charts continue to suggest there’s more selling to come by fall.

The big rebound in prices Wednesday came after the White House appeared to walk back their earlier comments about OPEC output, saying the statements issued were “not meant to be for immediate response”. The WH Press secretary did not answer a follow up question asking them to explain how asking OPEC to pump more oil squared with their climate change agenda.

In addition, the letter sent to the FTC “encouraging them to consider” making sure the rules they already have in place are being followed because gasoline and crude oil prices haven’t been moving together lately, looks a little silly considering that the Department of Energy has published multiple reports just this week explaining why gasoline spreads & prices have reached multi-year highs.

The DOE’s weekly report was lacking in big numbers, with only small changes in inventory levels.  Refinery runs did tick up in 4 out of 5 PADDs, in what could be the summer production peak before fall maintenance (or hurricane season) starts to reduce run rates.  Gasoline demand estimates were down 3.5% on the week, but a tick higher in exports kept inventories from building.

Tropical Storm Fred lost strength crossing the mountains of Hispaniola yesterday, and forecasts suggest it will struggle to reach 60mph winds before making landfall on the Florida panhandle early next week. The lack of strength and path well east of the oil production and refining areas should make this a relative nonevent for fuel supply. Don’t relax just yet however, as there’s already another system coming in Fred’s wake given a 60% chance of being named next week, and with this year forecasted to be busy, it seems like just a matter of time before one of these storms heads for refinery row.

Today’s interesting read: How Chevron & Exxon are working to co-process renewable diesel and SAF through their existing refining systems, a method that could dramatically speed up and reduce costs of producing those bio-based fuels, and perhaps further challenge the feedstock market if the technology is proven and approved.

Click here to download a PDF of today's TACenergy Market Talk, including all graphs from the weekly DOE Report. 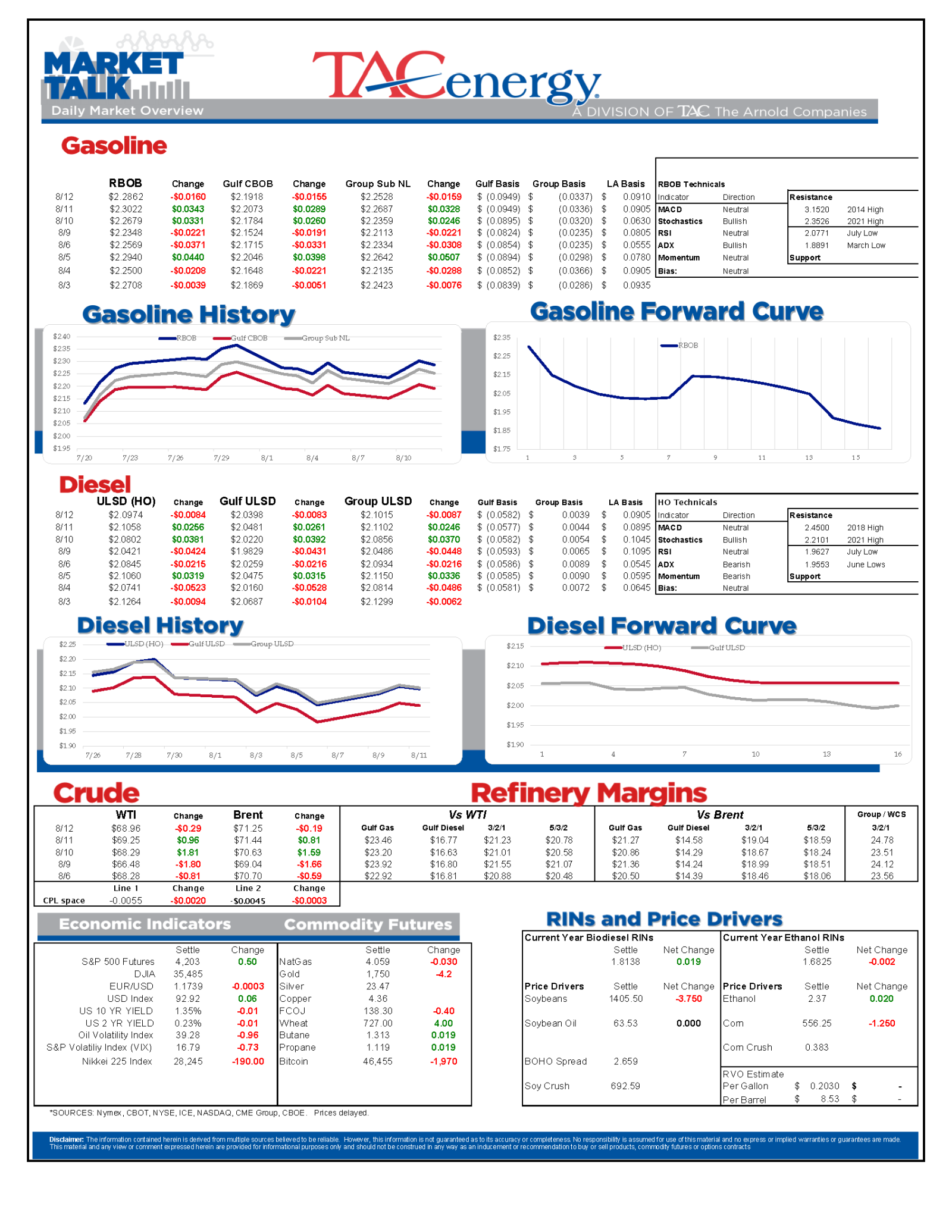