It’s A Relatively Quiet Start To The Trading Week, With Only 14 Cent Price Swings for Refined Products in Overnight Session

It’s a relatively quiet start to the trading week, with only 14 cent price swings for refined products in the overnight session. The past two weeks smashed records for price swings in both the ULSD and RBOB futures contracts, giving today’s early sell-off a feel of calm before another storm.

80 cent swings in gasoline prices would be the lead story in most cases, but they pale in comparison to the wild action we just experienced in the ULSD (HO) contract last week, with a $1.50 trading range that nearly tripled the largest weekly range prior to the war in Ukraine. The HO contract had its single biggest daily gain ever adding 52 cents/gallon on Tuesday, but still lost 35 cents, making it the 5th largest weekly loss on record.

The new form of diplomacy?  Iran fired missiles into Iraq over the weekend, claiming it was retaliation against Israel, who had apparently killed Iranian fighters in Syria, and allegedly meddled in the nuclear negotiations that fell apart last week. Based on the market reaction today, nobody is too scared of Iran right now.

The FED’s much anticipated FOMC meeting kicks off tomorrow and just about everyone expects a 25 point hike in interest rates to be announced Wednesday. The CME’s Fedwatch tool shows a 96% probability of a 25 point hike, whereas a month ago before Russia’s invasion sent global markets into chaos, 60% thought there would be a 50 point hike. 10 year treasury yields are trading near a 3 year high this morning ahead of the meeting.

The EIA this morning took a closer look at where Russian energy exports were going, highlighting the well-documented struggles for Europe to replace oil and gas supplies, and not-well-documented amounts of coal that traditionally moves to countries in Asia. 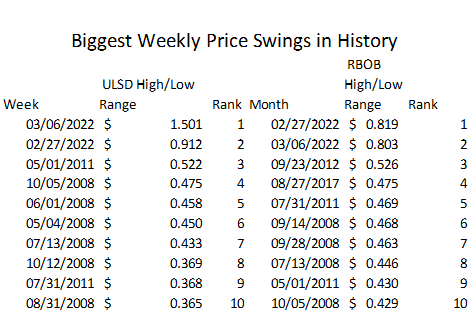