Energy futures are looking at a fourth straight day of losses, but RBOB gasoline futures have just moved into the green after trading lower overnight, putting a brief hold on the selling. Most futures and cash market prices are trading near 1 month lows as demand concerns and seasonal influences both appear to be weighing on a market that has been flashing technical warning signs for some time.

A large drop in Chinese refining rates was also given some credit for the selling as it was seen as a sign of weakening demand in the world’s largest energy importer, rather than a sign of lower refined product supply with those plants cutting runs. In addition to the energy concerns, there are larger concerns that the recent spike in COVID rates is further complicating supply chains that have been a mess for months.

For much of the past decade refiners with advantaged crude oil could make healthy profits while those without (like most on the US East Coast) struggled to break even. We’re seeing a similar phenomenon today in the renewable fuel refinery race as the shortage of bio-mass feedstocks is making huge profits for those with flexible inputs while others who must run soybean oil are facing challenges. Relief could be on the way as the world’s largest soybean exporter has reduced domestic biodiesel blending requirements, which will allow more soybeans to reach the global market and be turned into food, tires, or perhaps renewable fuel.

The vicious cycle of drought is forcing water allocations across the South West, and in turn threatening electricity supplies in the region, which ends up being bullish for supplies like natural gas. This phenomenon is not unique to the US, as Brazil is facing shortages of both water and electricity, which is helping boost US fuel exports to supplement their supply.

Those exports are a lifeline to US refiners as they help both relieve a supply overhang as the demand recovery plateaus this summer, and avoids the Renewable Fuel obligation that tacks another 20 cents/gallon of cost to domestic sales. Citgo noted that higher export volumes from its refineries helped push the company to its first profitable quarter since 2019, when it lost access to Venezuelan crude.

There are 3 active storms in the Atlantic basin, but none look to be a supply threat. Fred moved onshore Monday with minimal disruption to the Florida panhandle, and terminal loading racks resuming liftings last night.  Grace still appears headed for Mexico, staying well south of the oil production and refining zones along the Gulf Coast, and Henri is doing loops around Bermuda and doesn’t appear to be heading to the US. 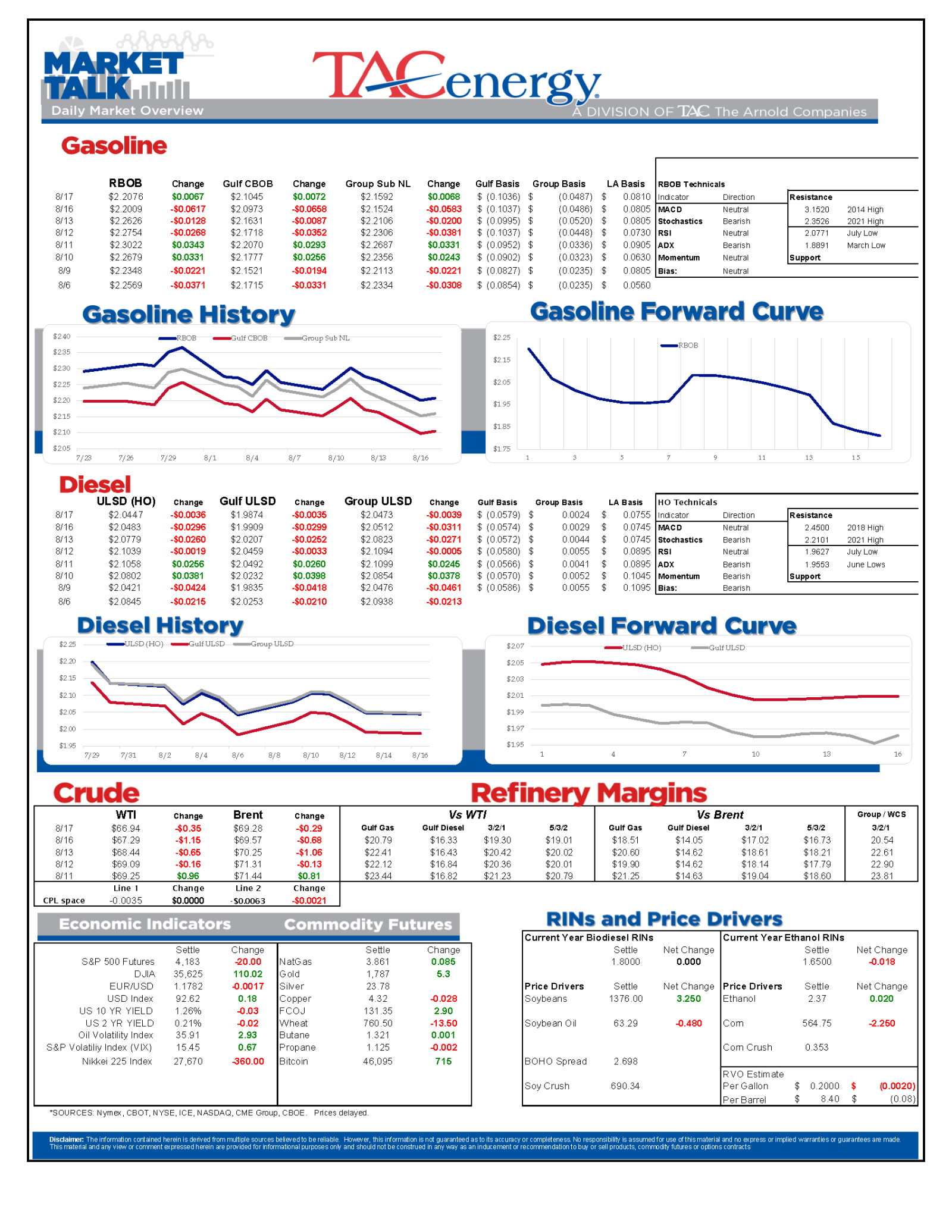 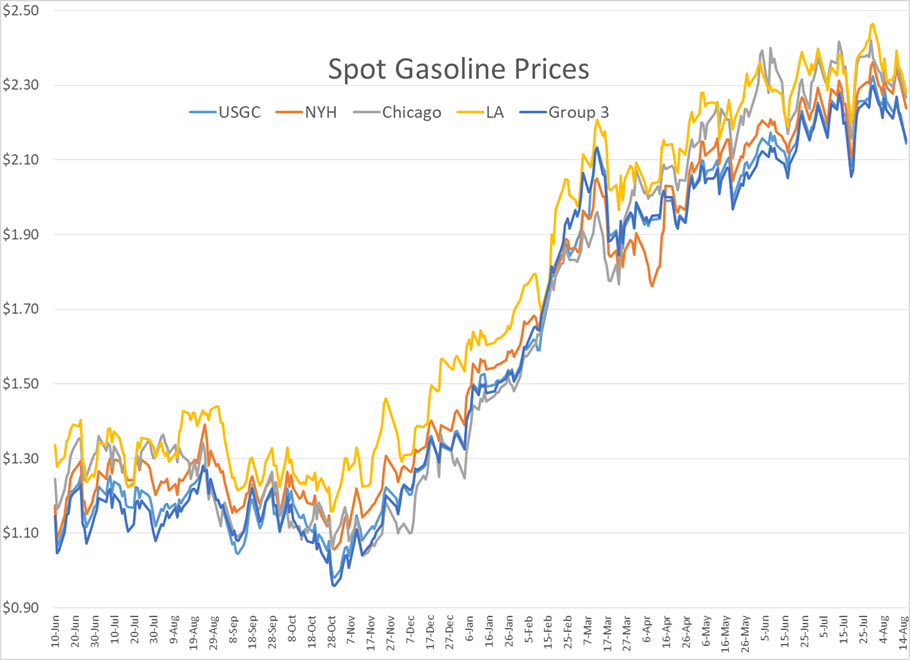 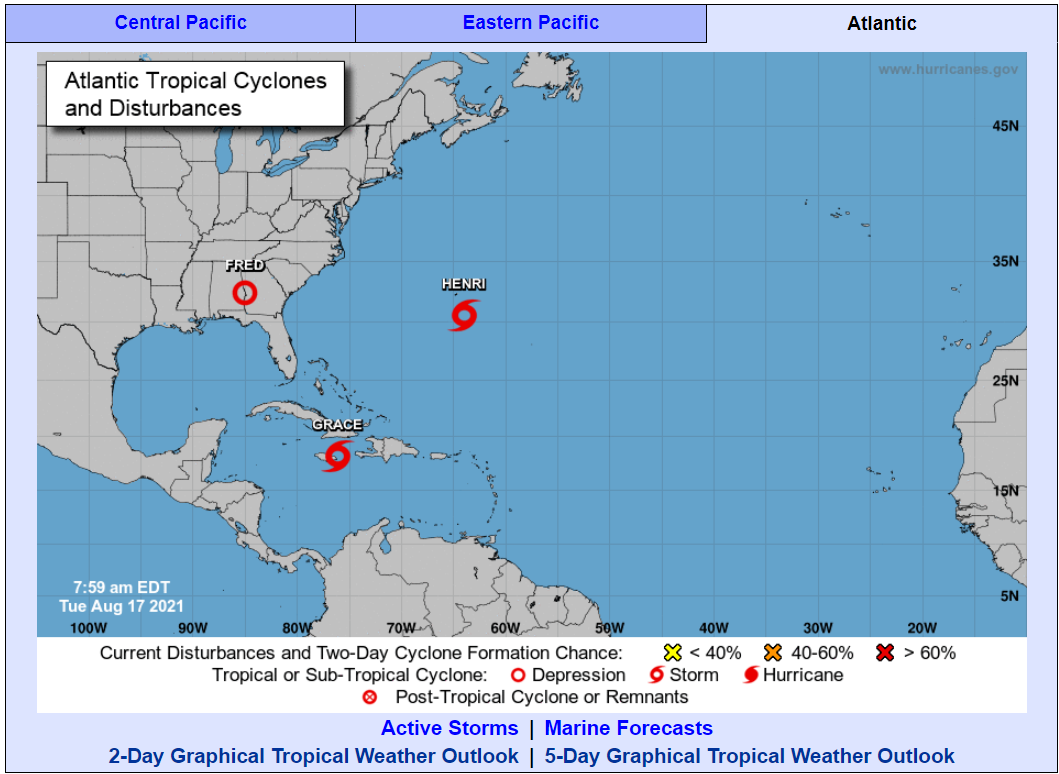