Energy and equity markets around the world are seeing another round of selling to start the week as fears of a bubble in stocks, housing and commodity prices have both investors and traders on edge.

Saudi Arabia cut its price premiums $5/barrel over its benchmark for Asian buyers, the first reduction in 4 months, after that premium reached a record high for May. The demand slowdown in China is getting credit for the price drop, but no doubt the bootlegged Russian barrels trading at steep discounts for those willing to buy them are also playing a role. While the price cuts are certainly a sign that the market may be cooling off and will be noted to justify today’s selling in futures, the remaining premium for Saudi barrels is still at the 2nd highest monthly level of the past 2 years so it’s not exactly collapsing.

After 2 months of being a sub-plot to the diesel show, RBOB futures have been taking the lead lately and managing some healthy gains even as distillates come under pressure. Gasoline prices didn’t quite reach their record high set back in March, but they did have their highest settlement of all time on Friday at $3.7590, and several spot markets reached new record highs on the day as well.

Money managers continue to tread lightly in energy contracts, with relatively modest positions and very low open interest. Most notable from last week’s CFTC Commitments of traders report is that the short positions held by money managers in RBOB contracts dropped to the lowest level in more than a decade. If you subscribe to the theory that hedge funds typically end up being wrong, this lack of short bets, even though prices are holding near all-time highs, may be a sign that the bull trend is coming to an end, especially as we are now in the seasonal peaking window for gasoline prices.

Baker Hughes reported 5 more oil rigs and 2 more natural gas rigs were added in the US last week. Louisiana took the top spot on the week, accounting for an increase of 4 rigs, while Texas saw another small weekly decline. An EIA report last week highlighted the growth in capital spending in the oil patch in recent months as surging prices are creating a huge increase in cash flow. That report also had a warning that drilled by uncompleted (DUC) wells have reached an 8 year low, meaning even more investment is needed to keep output levels increasing. 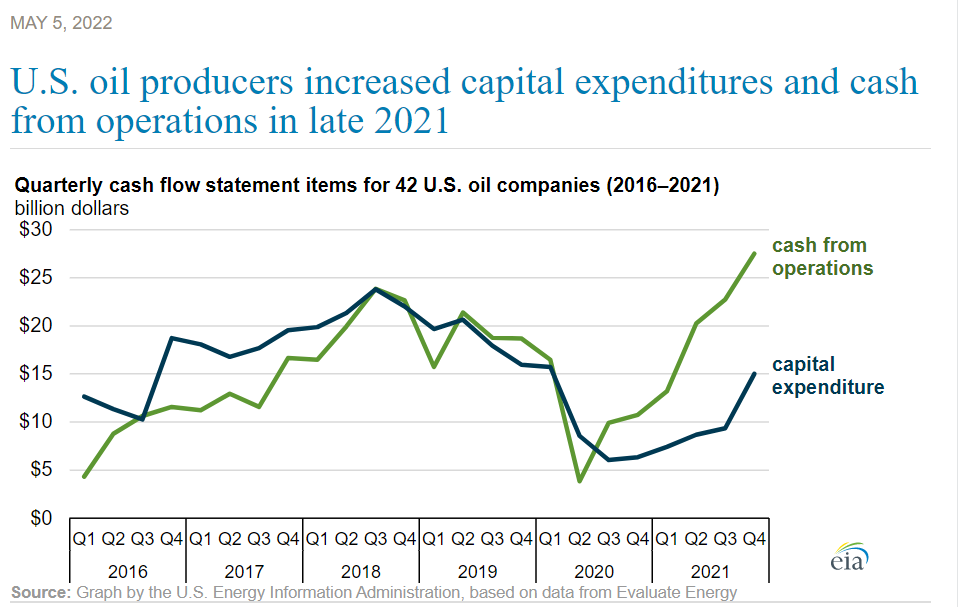