Disappointment over output cuts, and weak demand have taken the steam out of the energy price rally this week, although the selling has been limited so far, leaving the upward trend intact for now.

Cheaters never prosper? OPEC’s early meeting idea fell through after Russia and Saudi Arabia drew a line in the sand on members of the cartel who aren’t meeting quota. Given the decades of cheating that some of these countries are known for, it seems unlikely the new deal gets done, which seems to have yanked the rug out from under the rally in oil prices.

While the OPEC bid may be gone for now, there are reports that U.S. producers have once again over-healed themselves and may be now be inadvertently setting the stage for a short term oil supply crunch later in the year. The DOE’s latest weekly report seems to add validity to that theory, as the report showed more than one million barrels/day of oil was unaccounted for in the U.S. last week – the fourth straight week of a record in that missing oil figure - suggesting that actual daily output is closer to 10 million barrels/day, rather than the 11.2 million barrel/day official estimate.

Diesel continues to find itself in the unusual position as the weak link in the chain, with days of supply surging to a record high north of 64 days, compared to a seasonal average of 38 days this time of year. Diesel stocks are now at the second highest level on record, and with refinery runs continuing to ramp up, while demand and export volumes stagnate, it seems likely we’ll see a new inventory record set next week. Gasoline stocks meanwhile are sitting at 34 days’ worth of supply vs. a seasonal average of 24, but unlike diesel, are trending lower since reaching a record high of 52 days when the world stopped in early April.

So far, the disappointing demand estimates have only led to relatively minor selloffs, and technical support continues to hold, suggesting traders are willing to overlook current weakness, as long as the future optimism about the economy reopening remains.

Not much change in the forecast path or intensity of Cristobal over the past 24 hours, although it now looks like it will be over the Gulf of Mexico for an additional day, which could allow it to strengthen more and perhaps reach hurricane status. The current path threads the needle and would avoid a direct hit on any refineries, although some offshore oil rigs are already removing non-essential workers as a precaution. 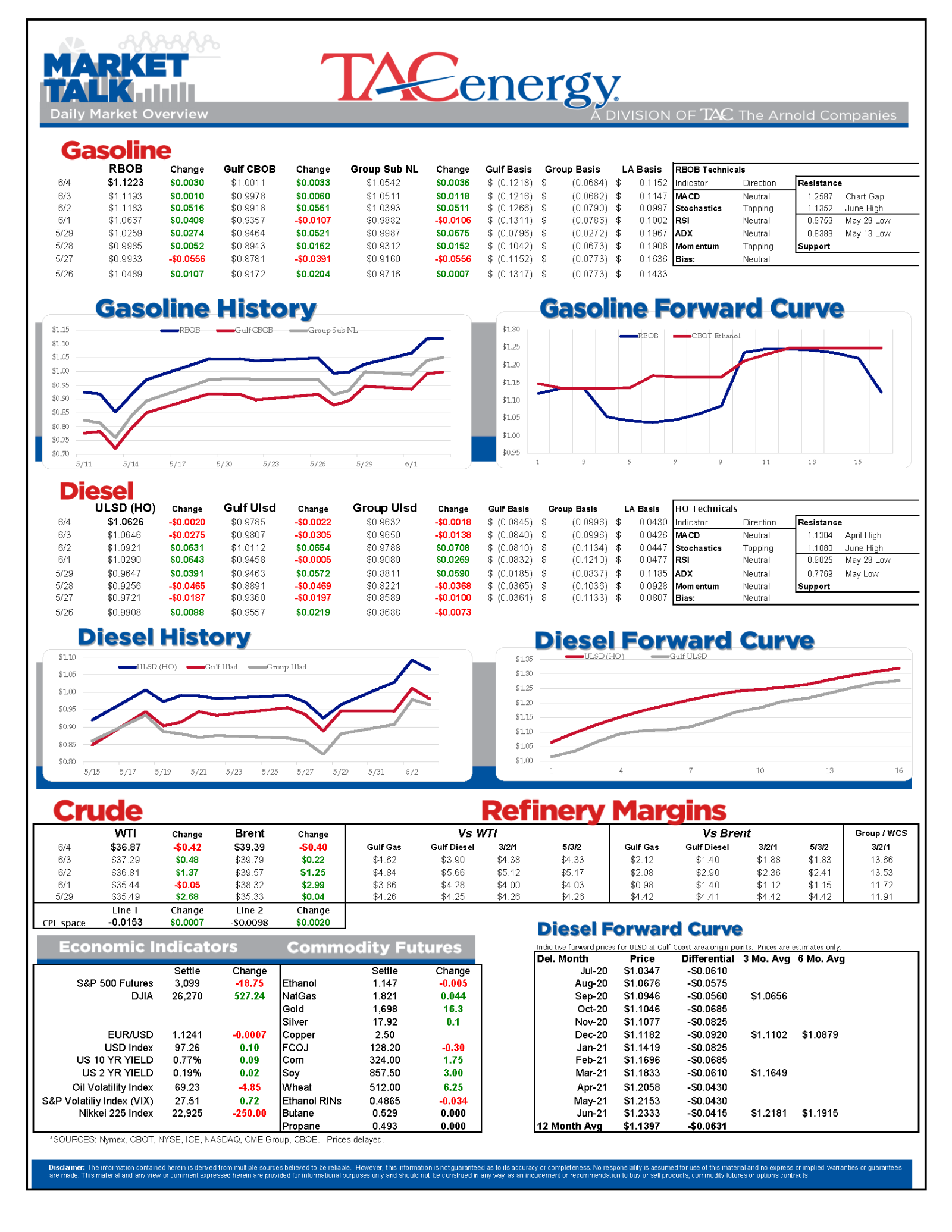 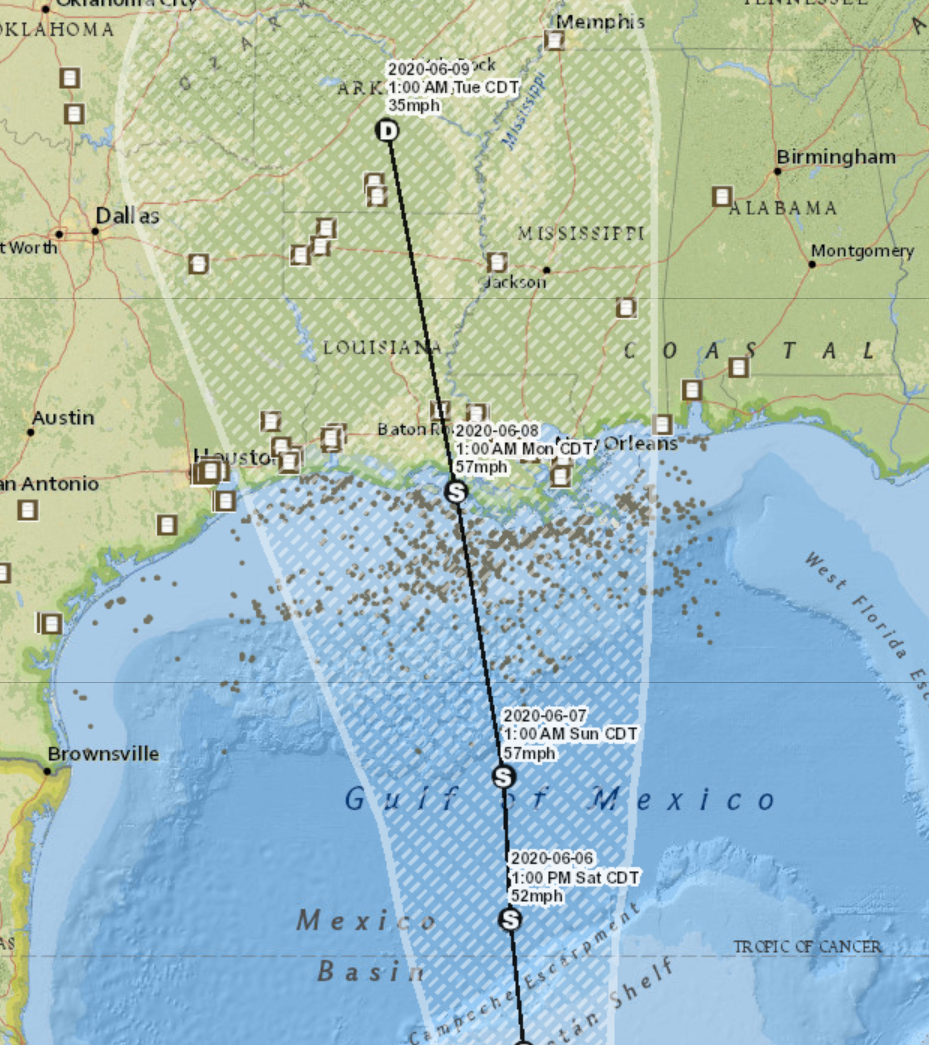 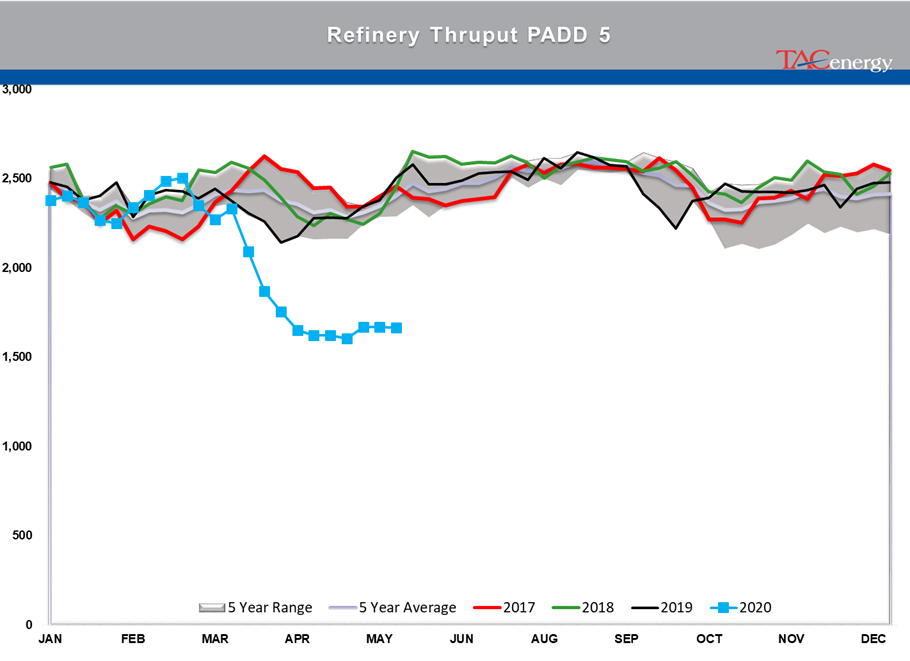