After trading lower for most of Tuesday’s session, energy futures staged a strong rally in the last 15 minutes of trading before settlement and that upward momentum has carried through to this morning, in spite of inventory builds in crude and gasoline last week. In the daily coronavirus market teeter-totter, longer term vaccine optimism is winning over short term shutdown concerns today after another positive finding on Pfizer’s experimental drug.

The API reported a large build in crude stocks of 4.1 million barrels last week, while gasoline stocks increased slightly by 256,000 barrels. Distillates meanwhile had a large decrease of five million barrels on the week, consistent with the evidence we’re seeing in numerous markets in the Midwest, Rockies and South West that diesel supplies have suddenly become tight.

This situation feels similar to what we saw with the first round of shutdowns in the spring where gasoline demand reacted faster, and distillates were strong for another month or so, but then gasoline consumption recovered much faster. The DOE’s weekly report is due out at its normal time this morning, but it will likely take another week or two for the impact of the latest closures to show up in the nationwide data.

Another COVID refinery casualty? BP filed notice with Illinois and Chicago officials of possible layoffs exceeding the reporting threshold of 250 salaried employees. It’s unclear at this point if these layoffs might impact the office operations in Chicago or Naperville, IL, or if they could mean that some unit(s) could be closed at the Whiting, IN refinery, the largest production facility in PADD 2, and the sixth largest in the country.

Not done yet? After hurricane Iota became the second major hurricane pound central America in two weeks, the NHC is tracking two more potential storm systems today. The good news is both systems are given low (20%) odds of developing in the next five days. The bad news is several hurricanes in the parade of storms that ended up hitting the U.S. already this year started in similar fashion, so we’ll be stuck watching weather right through the end of the official hurricane season November 30 and probably beyond.

This hurricane season set records for the number of storms to form in the Atlantic basin, and the number of storms to hit the U.S. Coast. The EIA this morning highlighted the impact on Gulf of Mexico oil production, which dropped by the most in 12 years due to these storms. Numerous refineries were also shut down, some more than once, due to the parade of storms, and yet prices barely flinched due to the weak demand situation. 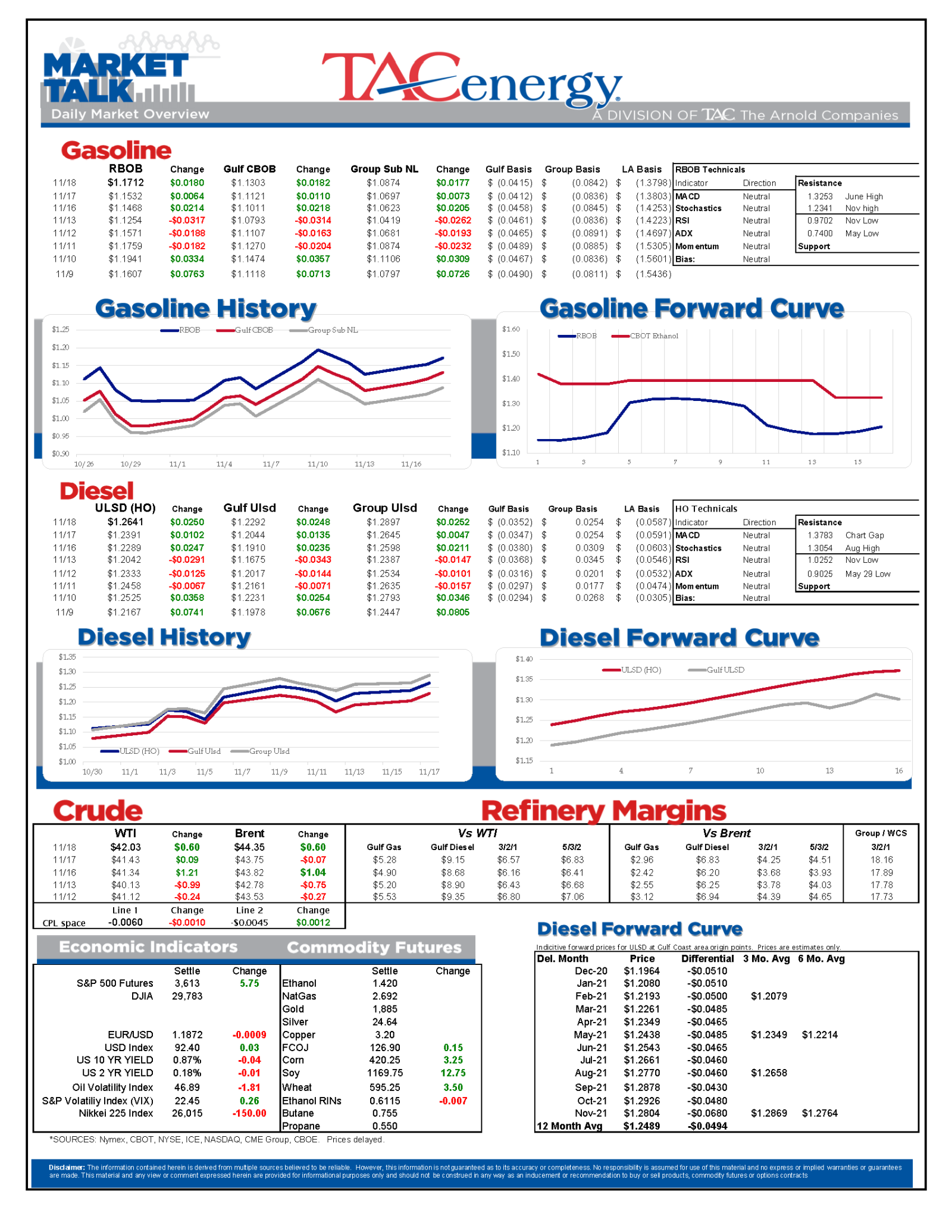 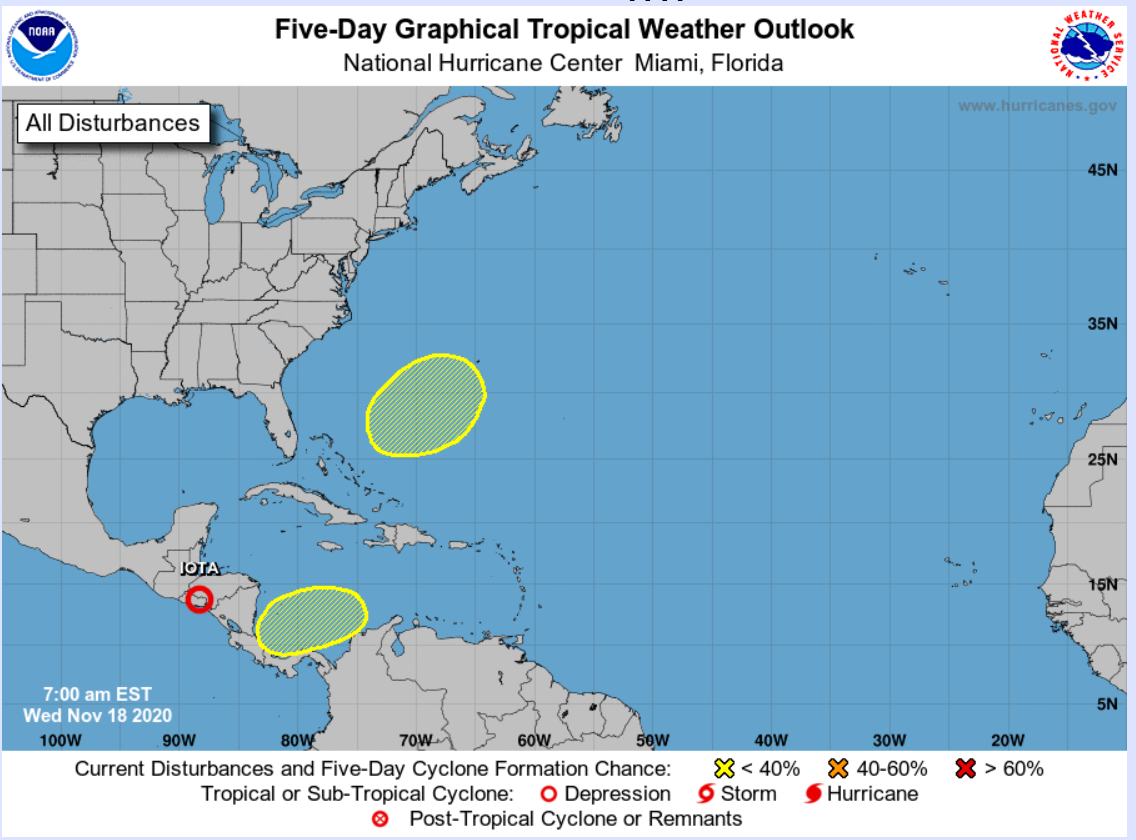 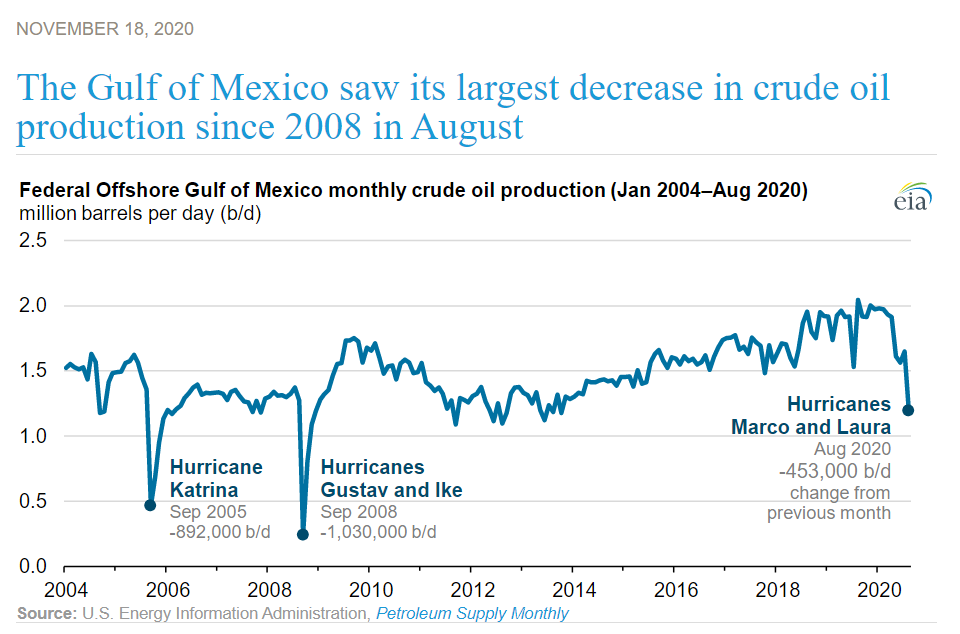