Bulls Aren’t Giving Up Control Of This Market Just Yet

We saw a big pullback in energy prices over the past 24 hours, but a 5 cent bounce from overnight lows suggests the bulls aren’t giving up control of this market just yet.

Wednesday’s trading created an outside down pattern on the daily charts after setting a new 7 year high overnight, only to end the day with a lower low than the previous session. That type of bar is known to be a classic reversal pattern that sets up more selling at the end of a rally, and that’s exactly what we got overnight with products dropping another 5-6 cents from the settlement, which marks a decline of 12-15 cents from the highs set just 24 hours earlier.

Now the fun begins as prices have bounced nearly 6 cents off of trend line support based on the huge rally over the past 3 weeks, suggesting this selloff was more profit taking after the market was severely overbought, and not a reversal in trend.   As long as we see products hold above those overnight lows ($2.25 for RBOB and $2.35 for ULSD) there’s an argument to be made that the upward trend is still alive and should favor higher prices in the weeks to come. IF that trend breaks, expect another 10 cents of downside in short order.

For what it’s worth, the big physical traders don’t appear to be buying the big run-up in futures, with basis values for gasoline in particular and diesel to a lesser degree sliding this week.  Speaking of which, it’s been a bad week for spills, with a tank leak at the 2nd largest refinery in the country making for some eye popping videos, but the market shrugged it off as the oil is contained in the berm system designed for just this type of event and operations at the refinery don’t seem to be impacted.  Similarly, LA-area refiners don’t appear to be facing shortfalls from the pipeline leak that’s been headline news for the past several days as prices in the market haven’t flinched. Meanwhile, Kinder Morgan’s refined products pipeline FKA Plantation remains closed until the weekend due to a spill in Alabama. Originally that line was scheduled to come back online Wednesday, but restart has been delayed until the weekend as it appears a cause of the spill is still under investigation.  Allocations at terminals along the line have tightened up, and some outages are occurring, but so far the impact is relatively contained.

The EIA published its annual world energy outlook Wednesday. The highlight (or lowlight depending on your perspective) of the report was that despite the bandwagon effect of net-zero by 2050 claims, production of oil, nat gas, and even coal, is expected to continue growing for the next 30 years as emerging markets – primarily in Asia - continue to drive demand.  That report is a harsh reality check for those aiming to end fossil fuel usage.

Not much exciting from yesterday’s DOE status report. Total US refinery runs did surpass 2019 levels for this time of the year, marking the first week since the start of COVID we’ve seen that.  Run rates were up in 4 out of 5 PADDs for a 2nd week, as plants seem to be returning from fall maintenance and taking advantage of the unplanned downtime at 2 gulf coast plants since Ida knocked them offline.

The tropics remain quiet, with no expected storms to be named over the next 5 days according to the NHC. 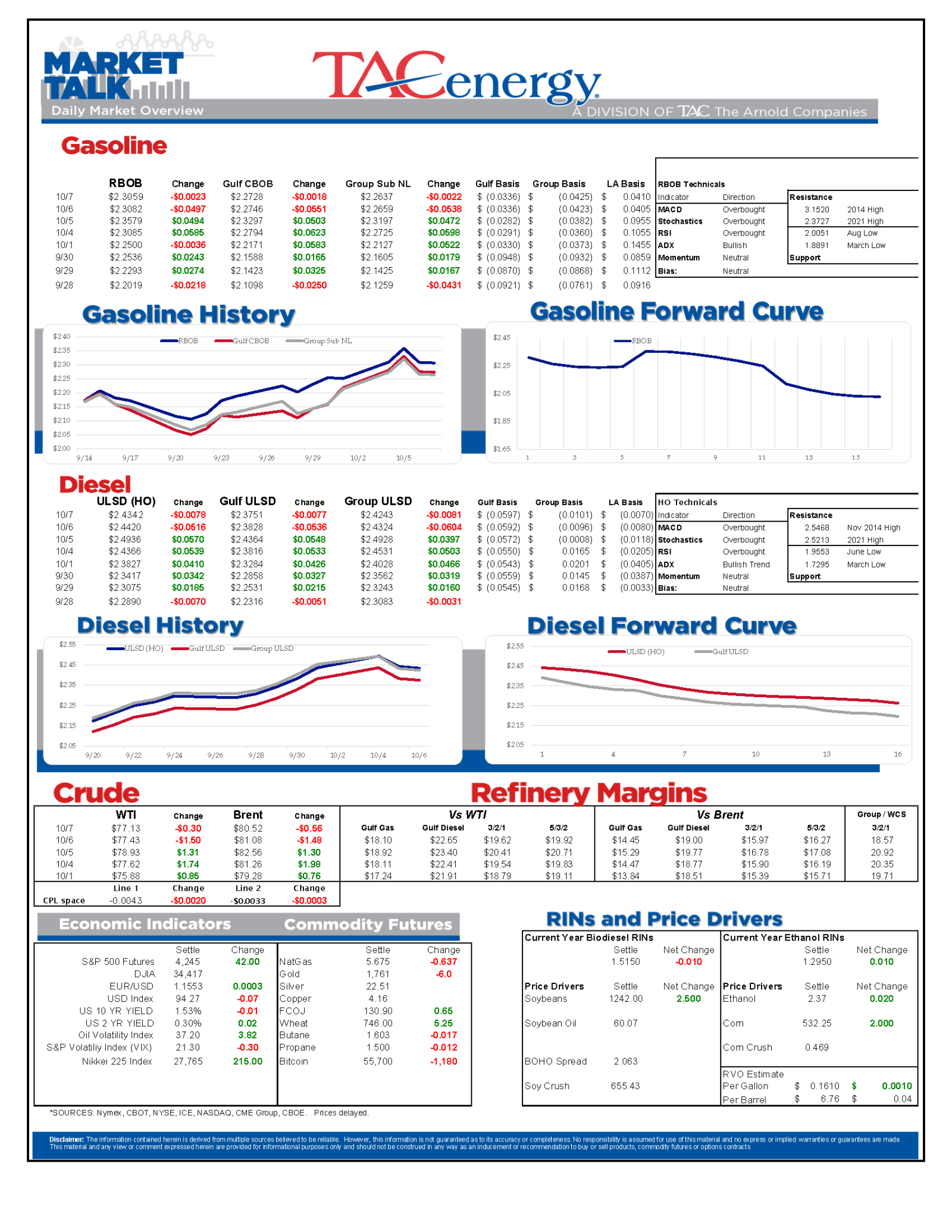